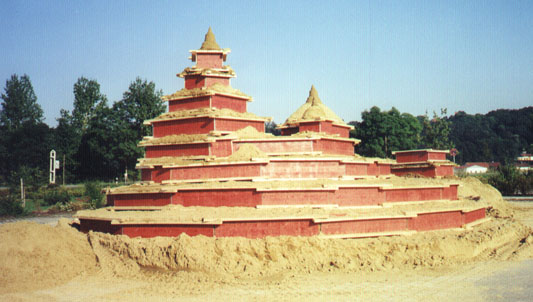 The sand is initially compacted into our custom made wood forms.
We get the sand wet and "tamp" the sand down in each layer with either a hand tamper or a gas powered jumping jack tamper. 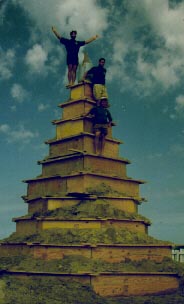 The sculpture then looks like a plywood wedding cake with the forms acting as our scaffolding to climb to the top. 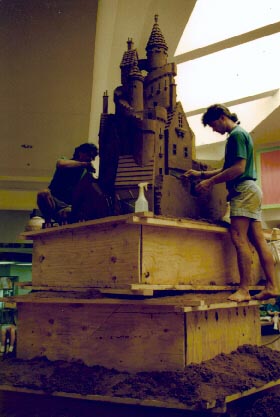 The wood layers are then taken off and the sand within carved, starting from the top, down.
The sand that is carved off the main "pound-up" can be re-packed into other forms to maximize the amount of sculpture out of every tonnage. 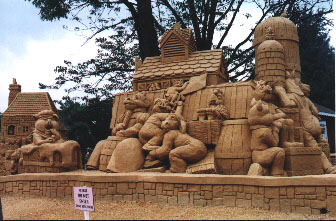 The final sculpture is free of the wood formwork and indoors can display indefinitely.
Outdoor projects under a tent can also display as long as the client would like.
If the client should choose to go without the tent, we have the ability to prepare the sculptures with a "windscreen spray" that can increase the display time dramatically.

[note: the above sculpture displayed outdoors, with no tent for more than a year in LaHaska, Pennsylvania.]

Take a time lapsed photo tour of one of our projects.. 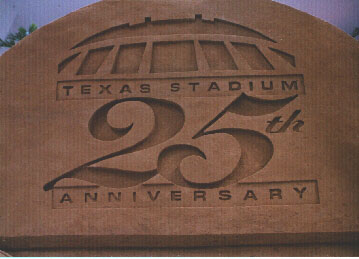 The Sculpture was made with the client's goals in mind:

To protect the floor, we lay down visqueen/plastic sheeting with plywood on top.

The plastic is lapped up and over the side trim for secure protection.

The sand is brought in. Note that it's a clean process and the sand is contained in the box.

The "pound-up" process compacts the sand.

The forms removed and the blocks sculpted.. here's the finished project.

Logos of underwriting sponsors were incorporated.

Were the mall's goals realized?

1. They wanted to raise money for Dallas Habitat For Humanity.....

2. They wanted to increase foot traffic.....

A 200% increase in mall traffic was reported over the period
and the Mall Merchant's Association was thrilled with "a dramatic increase in sales" by the viewers.

3. They wanted to generate media attention for the mall.....

Not only was the performance art of crafting the sculpture covered by all the major and many local TV networks... but it was featured many times in the district papers (including being picked up by the AP wire.)

A noteworthy addition to the mall's coverage was the incredible media attention they received for donating the 150 tons of sand to become the foundation of the house the Habitat For Humanity would build with the money raised..

You can get quotes, date availability, and answers to sand sculpting questions via e-mail sent to: